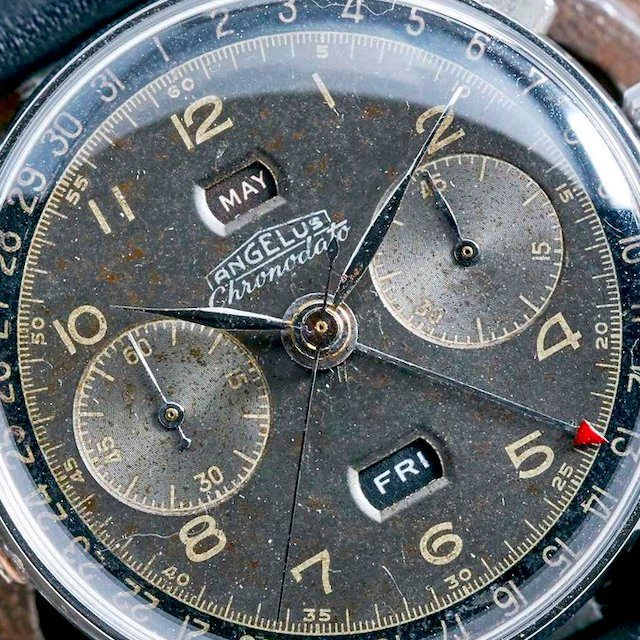 Like many in the Angelus Chronodato series, the design of the 1948 Angelus Chronodato Deluxe’s dial is an exercise in legibility. While a watch with so much information on the dial could seem cluttered, the dial of the Chronodato is perfectly balanced, with the day and month windows interplayed on a vertical axis amidst the chronograph sub-registers. The date’s displayed in a chapter ring on the outer edge of the dial, indicated by a red-tipped hand.

Angelus is a brand whose chronographs have been gaining a lot of momentum in vintage collecting circles. Like many brands, Angelus has a long and storied history of making watches – and making them well.

Their chronographs, in particular, were as innovative as they were praiseworthy. The Chronodato, introduced in 1942, was the first chronograph to feature a calendar. With its versatility of style, the Chronodato became the best-selling watch in Switzerland.

But innovation is often a double-edged sword, especially in the world of watchmaking, where thousands of hours of brain power and the equivalent amount of money can prove fatal if a product does not sell well. The poor performance of the Tinkler – that contained a quarter repeater, of all things – combined with the general poor sales of mechanical wristwatches in the Swiss watch industry, spelled doom for Angelus.

The brand soldiered on throughout the 1960s until the Quartz Crisis tolled the death of the brand.