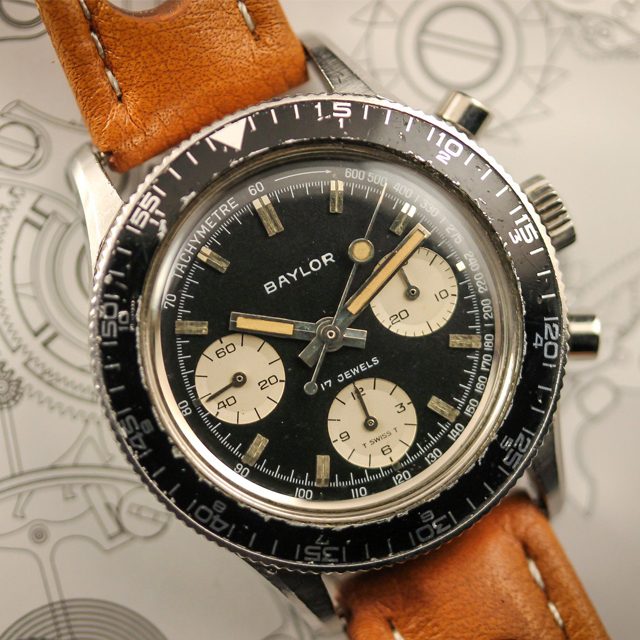 The 1960 Baylor Heuer Chronograph watches were made on the same assembly lines, used the same parts, and are every bit as cool as their Heuer-branded counterparts.

This Baylor Heuer Chronograph is based on the early manual-winding Autavias (such as Reference 2446). Baylor was the house brand for Zales Jewelers, so most of their chronograph models were produced by Heuer.

In the 60s and 70s, Heuer chronographs were the choice of real racing drivers. And have just recently begun to see a major uptick in value for many models. Experts predict that the vintage Heuer market is on the cusp of a major price explosion.

At that time (60s and 70s), Heuer was not only making watches for themselves but also under contract for a number of other brands and retailers, these watches were made on the same as their Heuer-branded.

Heuer sold off a large number of their manually-winding chronographs to Zales as they made the switch to automatic wristwatches in 1969/70, so this is likely how this piece came into being.

Featuring a central sweeping chronograph seconds hand, rotating the outer bezel and a “panda” dial with triple subsidiary registers, these pieces are every bit as cool as an Autavia and its less than half the price of the name brand.

It is arguably the best chronograph movement used by so many famous brands that are still around to this day and are increasingly well sought after by collectors worldwide.