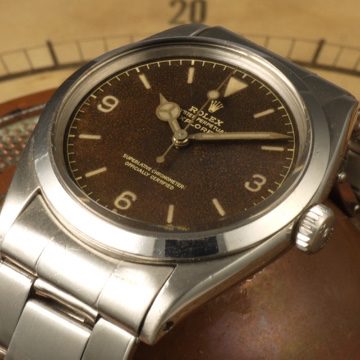 Rare gilt-glossy and chapter ring dial. The 3-6-9 dial with Mercedes hands is the signature of the Explorer.

Rolex Explorer history began when Tenzing Norgay stepped onto the summit of Mount Everest alongside Edmund Hillary with a Rolex Explorer strapped to his wrist (although the watch did not yet bear this name). As one of the first watches to reach Everests peak, the Explorer quickly became synonymous with the extreme climb. In later expeditions, Rolex was always the official supporter, equipping climbers with their own Explorers, cementing the history of the Rolex Explorer as the watch of choice for mountain climbers and other adventurers.

For 57 years, the Rolex Explorer had always been manufactured in the 36mm. diameter. In this age of rising wrist watch sizes, Explorer model reference 214270 has deviated traditional measurements by 3 points up to 39mm. at Baselworld 2010. Personally, I dont like the new size because, by keeping the inner lugs at a 20mm. distance, the Explorer lost its perfect proportions.

The first challenge was archived in 1910 when Rolex sent its movement to the School of Horology in Bienne and awarded the world’s first wristwatch chronometer rating.
Realizing the value of a timing certificate, the company decided they would not accept any movement unless it passed a Rolex seven-day battery of tests, so Rolex set the timing standard for the rest of the watch industry.