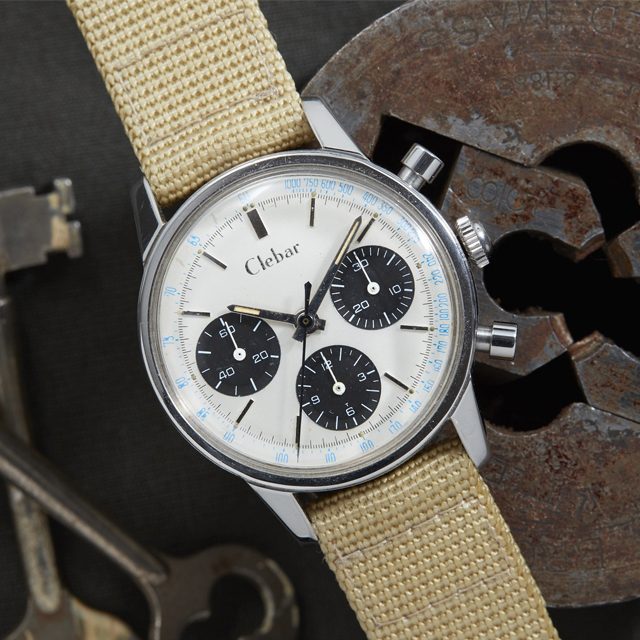 1965 Clebar Chronograph, this has to be one of the cleanest, most gorgeous dials. With a stainless steel case is approximately 36mm (excluding crown), Includes one 20mm tan nylon two-piece strap. It was founded in 1925 in Le Locle Switzerland and produced everything from stopwatches to wristwatches.

Names like Clebar, for instance. In Welsh, it means “clamor,” like the kind of noise that arises when someone puts a Paul Newman Daytona on the table at a watch get-together. But we’re not so sure how familiar the good people of Switzerland were with Welsh when they came up with the name Clebar. However, a look in a French-English dictionary yields the word clébard. Which might hold the key to the brand name’s origins.

In English, it means mutt.

The trademark was first used in the 1920s by Edward Trauner, Inc., best-known for bringing Zodiac watches to the States. By the 1950s it became associated with watches that collectors have dubbed “Poor Man’s Heuers” due to their similarity to watches like the Heuer Carrera or Autavia.

However, far from being pale imitations. “Poor Man’s Heuers” were made with the same care and attention to detail and oftentimes the same parts.

Faced with strictures on imports following the Great Depression. Many Swiss watch brands partnered with U.S.-based companies in order to bring their products stateside. The partnership between Longines and Wittnauer, or Wakmann and Breitling, are examples of this type of symbiotic relationship. Watches would be manufactured in Switzerland often with fewer jewels, to get around U.S. restrictions and then sent to the States, for either assembly or retail.

To prove that they were compliant with U.S. tariffs, the dials would be printed not with the name of the manufacturer. Such as Heuer or Breitling but with the distributors.

Since Zodiac had already gained traction in the U.S. Trauner pulled an old trademark from its archives and used it to import the sporty chronographs that modern-day collectors love.

Watches like this Clebar Chronograph. For example, which takes the classic white-on-black color-way and livens it up with a splash of blue in the outer tachymeter scale. Furthermore, instead of the budget-conscience (but no less reliable) Valjoux 7730, this one is powered by the Valjoux 72. Combining robust internals with cool looks, this is a mutt that simply begs to be taken for a walk.

So, if you’re one who takes a watch at face value and simply considers it for its looks and, maybe, for its internals nothing wrong with that you’re likely thinking that the 1925 Clebar chronograph is a pretty nice watch. Sure, it might be a little small for your normal tastes.