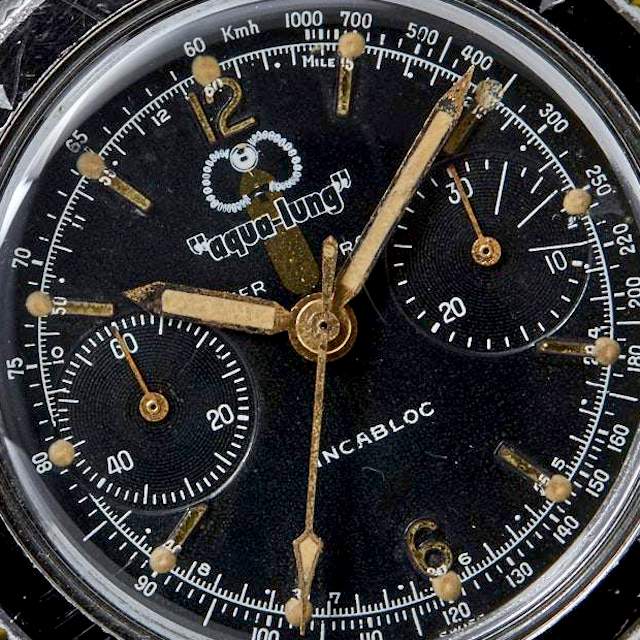 Known as 666 for the last three digits on the case, capped by a black rotating bezel. But the dial holds the secret to what beats inside: a Landeron Calibre 248 chronograph movement, beloved by many divers, specially for being a Aqualung.

The advent of the Aqualung Self Contained Underwater Breathing Apparatus (SCUBA) made skin-diving as a sport much more accessible to lovers of the sea. It was developed by the patron saint of SCUBA divers himself: Jacques Cousteau.

By 1946 the Aqualung was being sold in France to commercial and amateur divers, and by the 1950s it was available in the US and Great Britain. Its portability and the relative ease it brought to breathing underwater allowed more and more people to pursue the sport.

Soon Cousteau formed a company, U.S. Divers, for distribution of Aqualung and other branded merchandise.

Using the same A. Schild contract case that was used by brands from Blancpain on down, these watches also used the sturdy, no-nonsense A. Schild/Felsa Calibre 4004 movement found in Blancpains acclaimed Fifty Fathoms. The only chronograph being the Aqualung 666 Diving Chronograph.

Very few of these Aqualung 666 Diving Chronograph models exist to this day, or have survived more or less intact, making them relatively rare. Though exact quantities are unknown, experts believe that the watch was only produced for one year. Some suppose that it might have been released as a trial run that never went to full production.

Uncommon and undeniably attractive, it offers the collector a rarely-seen diving chronograph with a sterling diving pedigree.