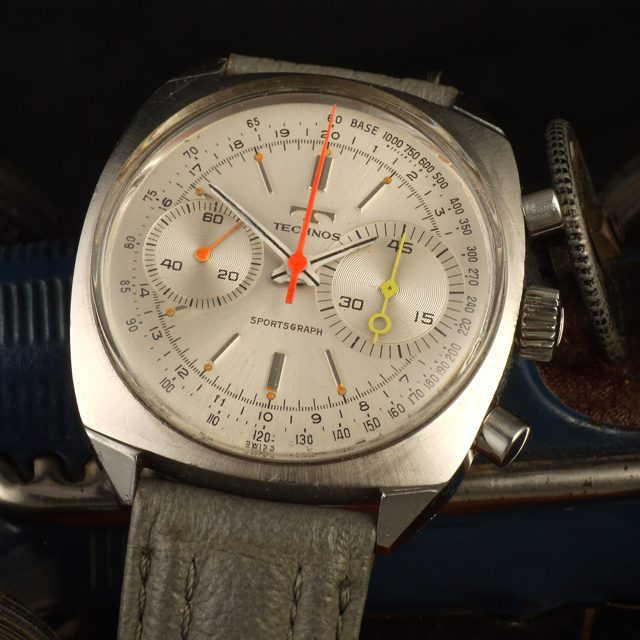 I love the dial of this Technos Sportsgraph. Note the orange lume dots matching two hands. I also like the detail of the big 45-minute subdial.

In 1900 Melchior Gunzinger established the small family watchmaking business in Switzerland. The company was named after the founder’s name M. Gunzinger-Hug. In 1924 the son of the founder, Joseph Gunzinger, who wasn’t satisfied by the production turnover of the company, registered the new brand under the name TM Technos. The company produced the watches on the base of the mechanical movements, assembled by hand.The products of the company was famous

The products of the company was famous by the traditional Swiss quality and gained the popularity abroad. In the 70-s with the creation of quartz movements, a lot of watch companies had to join in the bigger industrial syndicates to avoid bankruptcy. But the company Technos in the beginning of the 20th century choose the other way of development.
In 1956, the Brazilian businessman, Centauro Importadora, from Rio Grande do Sul, started to represent the Technos company in Brazil, with the slogan: “The most punctual Swiss of the world”. The success came very fast to the businessmen. He re-bought the company and the design the company became one of the leaders on the Brazilien watchmaking market.
Nowadays the company produces more than a million watch models per year.