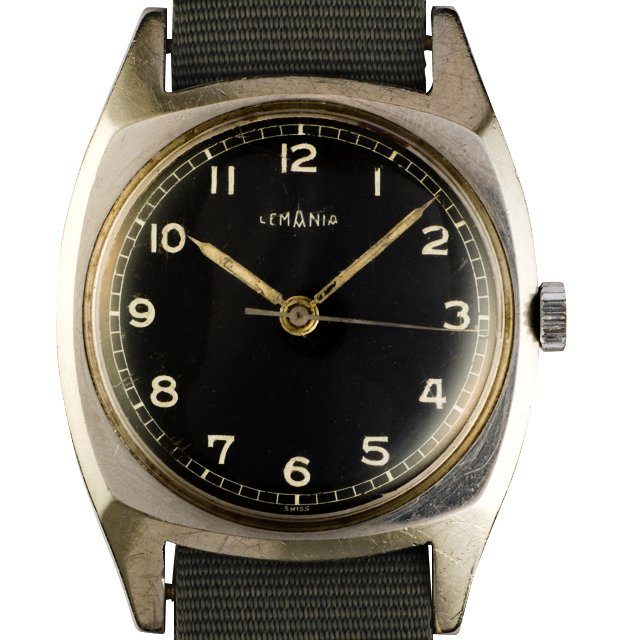 The Majetek Pilots watch was issued to members of the Czech Air Force in the late 1930’s and early 40’s and produced by three different brands – Longines, Lemania and Eterna.

It’s unique 37mm. cushion-shaped steel case, black dial, and simple Arabic hour numerals form a sharp package that looks just as relevant today as it was back then.

In 1981 both SSIH and AUSAG were in serious financial trouble and the Swiss banks forced SSIH to sell some assets to its management team, which is backed by outside investors including the Piaget family. This new company was called Nouvelle Lemania and its not hard to imagine that now free of its corporate role as a pure movement-specialist, Nouvelle Lemania started to expand its horizons and starts to look at designing and assembling watches under the Lemania brand.
By 1982 it was Heuers turn to face major changes, with Jack Heuer being forced by the Swiss banks to sell Heuer-Leonidas to a new group of investors led by Piaget and Nouvelle Lemania so Heuer was now owned by Nouvelle Lemania and its no surprise that in 1983 we see Heuer phasing out its own Calibre 11/12/14/15 Chronomatic movement, to be replaced with the Lemania 5100 automatic movement, a movement that was significantly cheaper to produce that Heuers own Chronomatic design.

The theory that seems the most likely is that in order to create demand for its own movements, the newly independent Nouvelle Lemania itself designed several watches in the late 1970s early 1980s and then offered these watches to other Swiss watch brands. Given the parlous state of the Swiss watch-making industry, the offer of a newly designed chronograph with a low-cost 5100 Lemania movement must have been attractive.
Most of these Poor Mans versions were sold by brands a lot smaller than Heuer. Sinn, Croton, Hamilton and others. Given that Lemania were partially in control of Heuer, it wouldn’t be surprising if Lemania made the decision that Heuer would sell these designs using old Heuer model names and then looked to bulk up volume with sales to other brands.