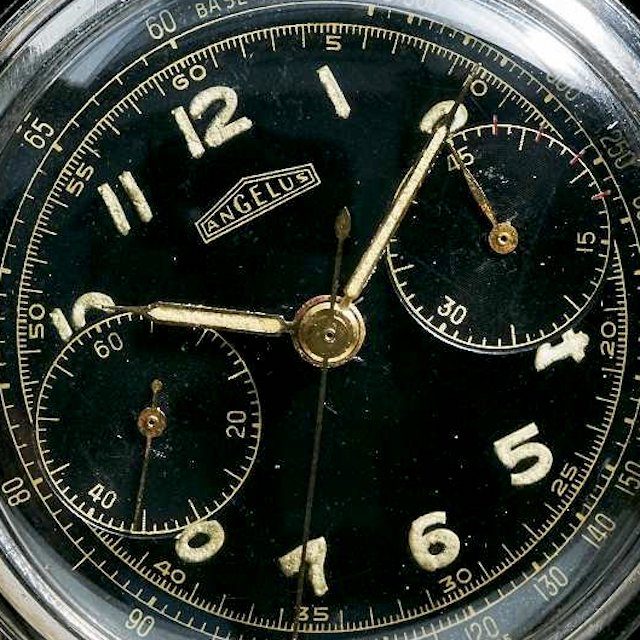 In bright 38mm steel cases with sharp tapering lugs that sit well on the modern wrist, the Angelus Chronograph Calibre 215 is composed by dials that share a trait with other military chronos (for instance, the Gallet MultiChron Regulator and the Zenith A. Cairelli): legibility.

Black, with large irradiated Arabic numerals and hands, the Angelus is designed to be read in the low light of an airplane cockpit. On the back of the case is the tell-tale inscription that guarantees the watch’s pedigree: “L.E.” for Legi Erő.

Inside it beats the Calibre 215, which deserves to be ranked up there among the likes of the Valjoux 72 or Longines 13ZN in terms of legendary chronograph bauches. Robust, deceptively simple to look at, the Angelus Chronograph Calibre 215 does what’s required of it with a minimum of fuss if kept in good working order. And its notoriety didn’t end when Angelus went out of business in the 1960s.

Angelus is now a brand whose old time chronographs have been gaining a lot of momentum in vintage collecting circles. Like many worshipped brands, Angelus has a long and storied history of making watches–and making them well.

At the brink of the World War II, may brand contributed timepieces to the war effort, producing chronographs for many of the world’s militaries. And Angelus with its Chronograph Calibre 215 was one of them.

Starting in the late 1940s, Angelus began producing chronographs for the Hungarian Air Force.Hungary had been banned from having a military air force by the Treaty of Trianon in 1920. So the Royal Hungarian Air Force p Magyar Kirlyi Honvd Legierőor Legi Erő – started covertly as civilian flying clubs. But by the 1930s the Legi Erő was officially established and recognized. As World War II began and Hungary’s neighbors to the north – Poland and Czechoslovakia – fell, the L.E. added their airplanes to their air force, proving worthy foes to the encroaching Soviet forces in the East.