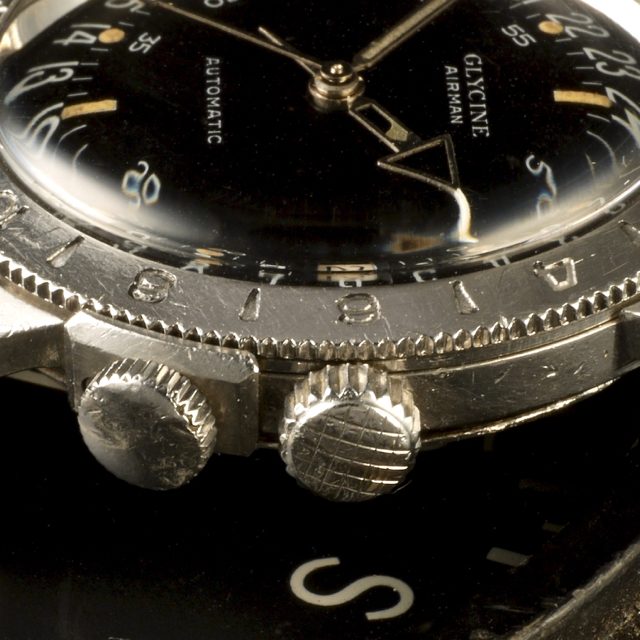 The Glycine Airman launched in 1953. A true Pilot watch, designed in response to the needs of actual pilots.

Throughout the 60s and until the late 70s was an important era for the Glycine. Airman’s popularity amongst the United States Air Force pilots during the Vietnam War, the watch remained essentially almost unchanged.

Founded by Eugne Meylan in 1914, Glycine produced watches at a factory in Switzerland.

Glycine began producing specialty ladies watches with precise movements. Most of all, small movements in cases of gold and platinum dressed with diamonds and precious stones.

In 1929, Captain Philip Van Horn Weems of the U.S. Navy (1889-1979), designed a system for navigation that used a rotating exterior bezel to synchronize the watch to the second using the radio time signal without adjusting the hands.

In 1931 Glycine created an automatic movement based on the Hardwood 180 degree Bumper. As a result it had a repair feature providing the watch maker with the ability to remove the automatic portion of the watch without disabling the movement.

Glycine introduced the VACUUM chronometer in 1952 , which were touted for their resistance to water and shock.

In 1953, Glycine introduced the most famous of all Glycine watch: the Airman. The first Airman AM/PM model came out with pencil hands and patent pending marks on case-back. It did not have a hack mechanism, it had red date and no magnifier.

In 1956 the second Glycine Airman model with a tail end minute hand, the minute hand had an extension, and finally, the date magnifier attached successfully.

Finally, in 1957-58, the Airman went through a modification where the tail end included, it wasout of the minute hand and placed on the hour hand.